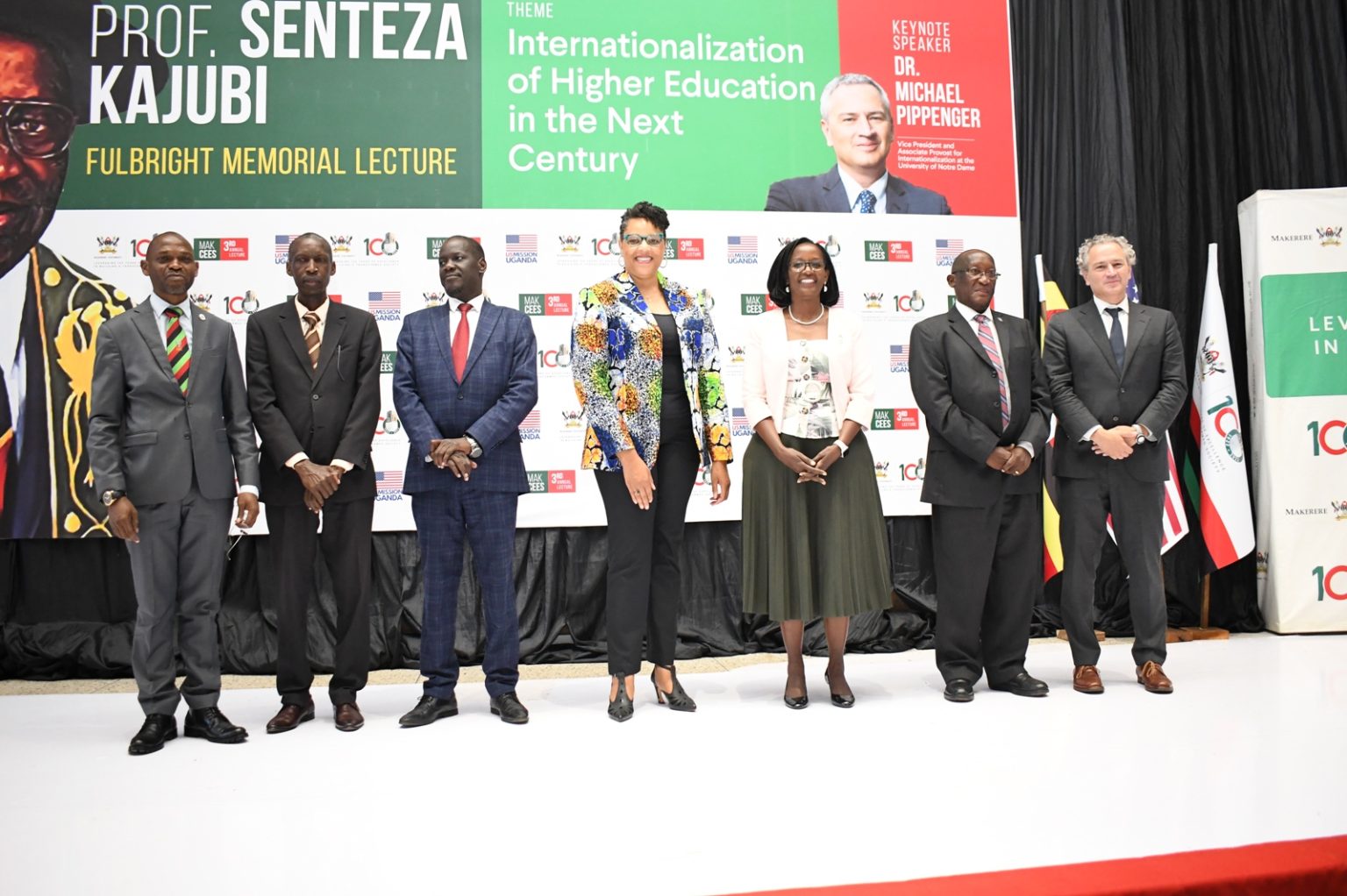 Professor William Senteza Kajubi, the first African to receive a Full Bright scholarship in 1952 and a renown educationist who diversified and chaired a committee to review Uganda’s Curriculum in 1990 was remembered and celebrated by Makerere University College of Education and External studies (CEES) in a public lecture that happened on 22, September 2022 at the Yusuf Lule teaching facility Auditorium at Makerere University. 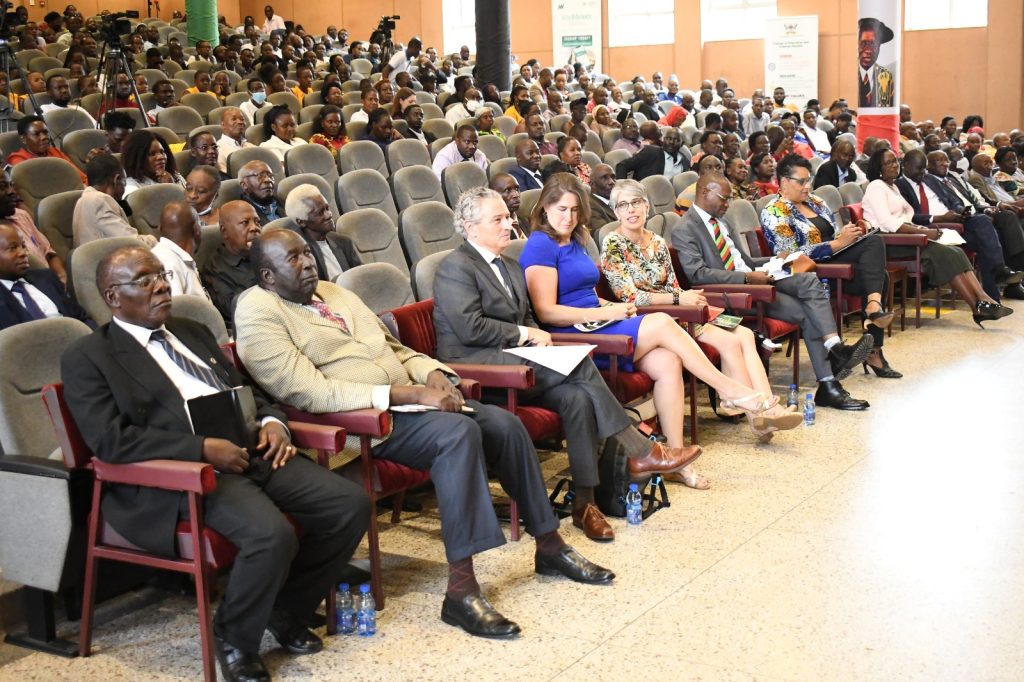 The ceremony themed “Internationalization of Higher Education in the next Century” was presided over by the United States’s Ambassador to Uganda Her Excellency Natalie Brown brought together many academicians, educationists and students across the world to celebrate the life and achievements of the person of Professor William Senteza Kajubi. In attendance also were Vice chancellors from Ugandan universities e.g. Soroti, Muni, Bishop Stuart, Bugema, Ndejje and Busitema.

Besides remembering the life of Prof kajubi, this public lecture also happened to be marking the Makerere university 100 years’ anniversary and also the 60 years independence celebration of Uganda and its fruitful relationship with the United States that has resulted and paved way for the FullBright Scholarship program and many other partnerships that have impacted lives of Ugandans. 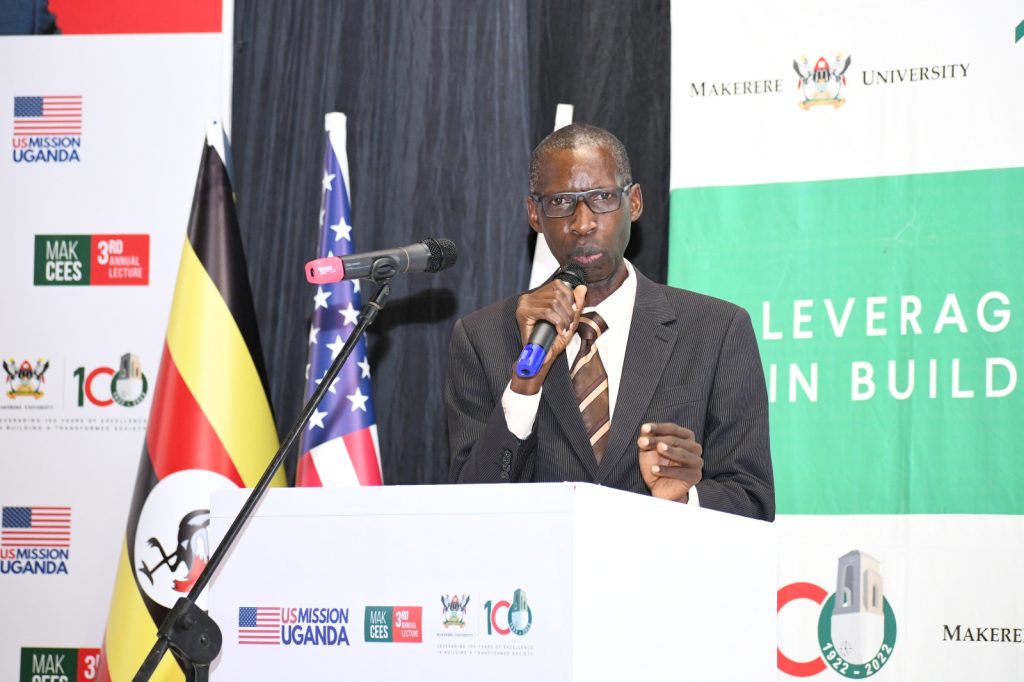 While addressing the congregation, the Principal College of Education and External Studies (CEES) Professor Anthony Mugagga hailed Professor Kajubi for the 1989 report on Education which the National Resistance Movement government has borrowed into its 10-point program.

“In 1954 when Pope Leo the 10th appointed Ben Kiwanuka as the first African Bishop, he cautioned him to be successful so that he can inspire more African theologists. Kajubi never got lost in the states, neither did he do drugs but he clang to studies and paved way for other scholars of the FullBright Scholarship program,” added Professor Mugagga who concluded his remarks cautioning the congregation to emulate Prof kajubi, and also thanked all staff who participated in seeing this event a success. 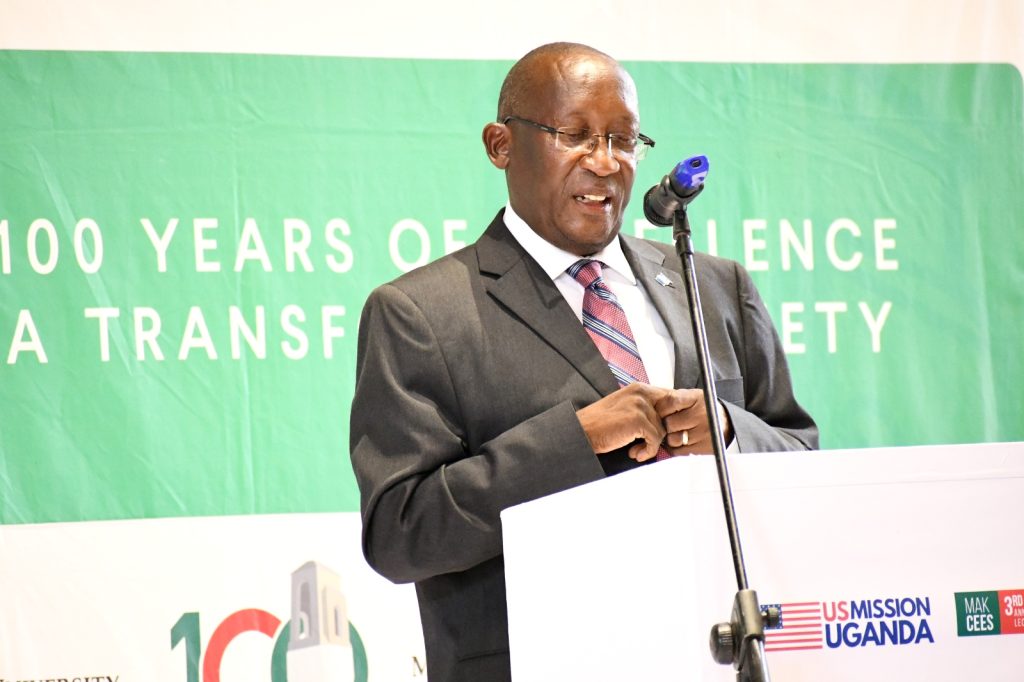 On behalf of the family, Wasswa Kajubi his son expressed their deepest gratitude and honor to Makerere University and CEES administration for always remembering their loved one even when he passed on long time ago.

The Chairperson Makerere University Council Mrs. Lorna Magara highlighted how the Late Prof kajubi’s life symbolized hard work, Persistence and Courage to pursing excellence and greatness. “It is safe to assume that Kajubi’s passion for education to Makerere and Fulbright Universities resulted into a lot including the phenomenal education reforms that saw admission of government sponsored students to Makerere,” Mrs. Magara said. 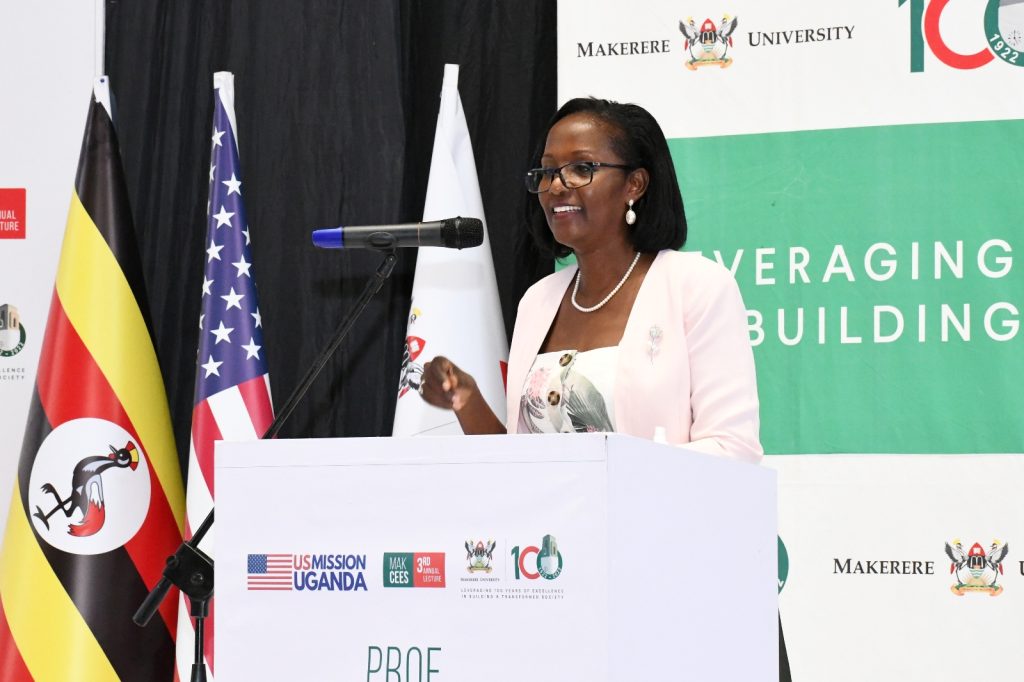 creativity, innovation, and courage to pursue and carry out a vision”. This hard work ethic, Mrs Magara informed the gathering, was reinforced daily by a
family motto in the Kajubi sitting room, "OMULIMU LYE LINNYA
LY'OMUNTU," which may be translated as ONE’S WORK IS ONE’S NAME. 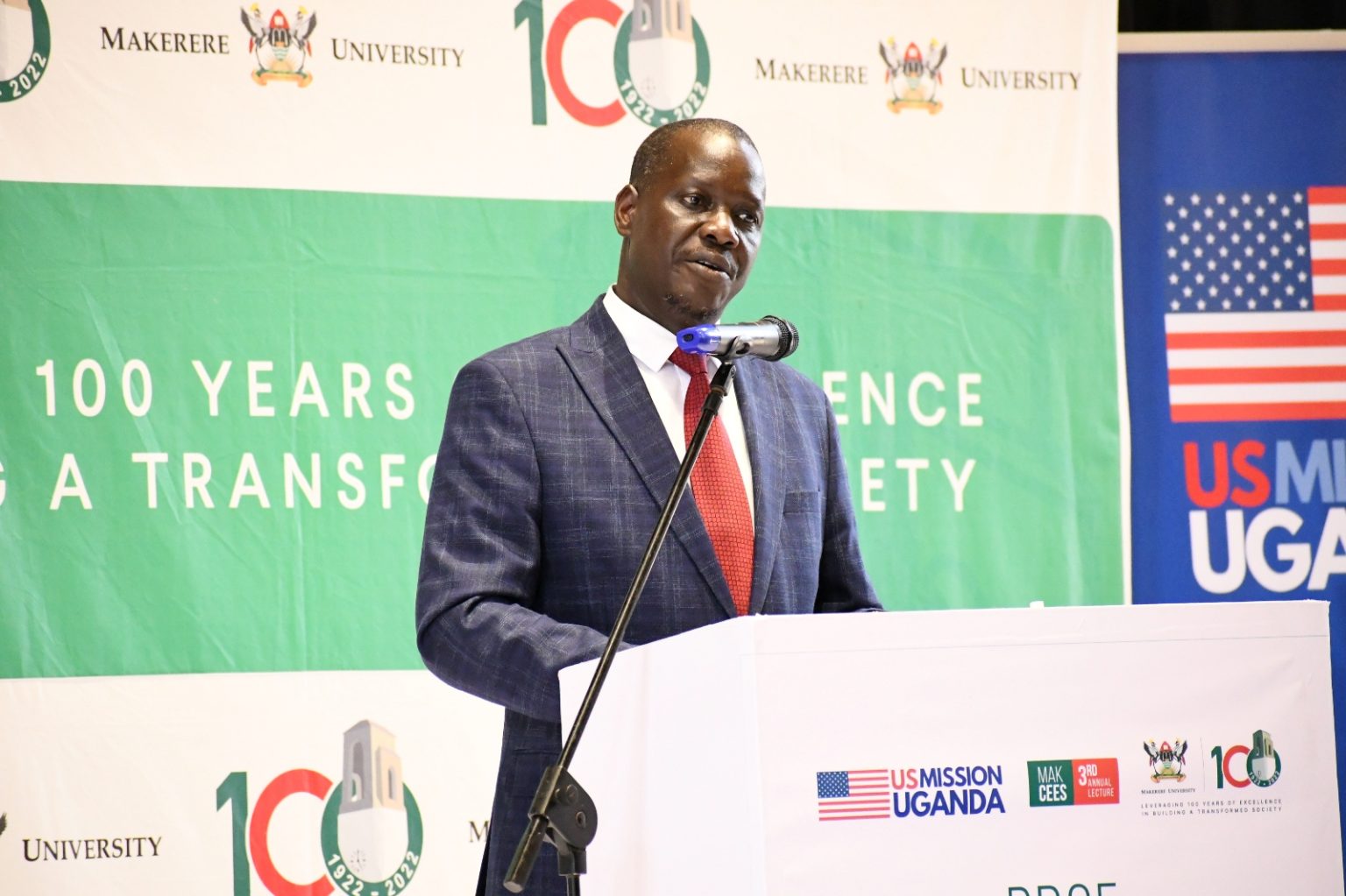 The late Prof. Kajubi’s passion and pursuit for knowledge can be traced through his education journey, from Mengo Junior Secondary school to Kings College Budo, to Makerere University, and on to the University of Chicago on a Fulbright Scholarship graduating with an MSC. with a concentration in Geography.

Upon return, he embraced the privilege and honor of serving as a teacher, and Administrator. His dedicated service saw him rise through the ranks to serve as Director, National Institute of Education (1964- 1977) and twice as Vice Chancellor, Makerere University (1977-1979; 1990 – 1993).

Her Excellency Natalie Brown the United States Ambassador to Uganda said,” Professor Kajubi is a shining star among Fulbright alumni, in Uganda and beyond.  He traveled to the U.S. in 1952 as a Fulbright student to pursue a master’s degree at the University of Chicago.  He returned to make great contributions to the education sector in Uganda and the region.  His two-time tenure appointments at the helm of this university demonstrate his outstanding leadership ability”.  Professor Kajubi did not limit himself to education alone, he went on to serve as a delegate to Uganda’s Constituent Assembly which created the new constitution in 1995, among other things.  His legacy of service to his country remains an inspiration to generations of faculty and students alike”. 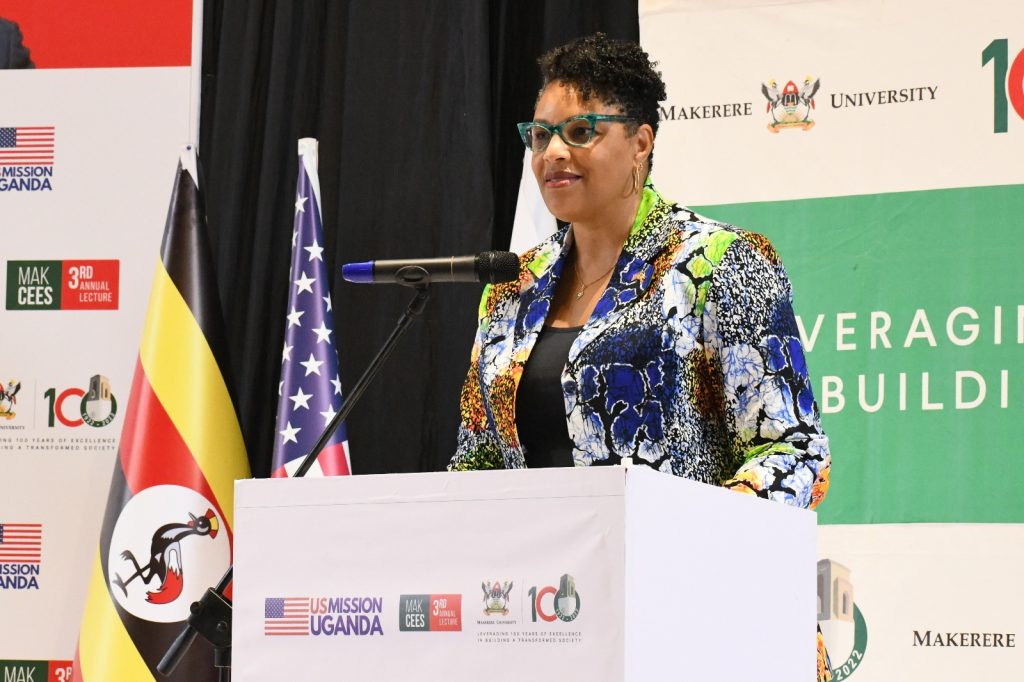 Ms. Brown said the US Mission in Uganda are proud to manage the Fulbright program in Uganda where 12 Ugandan Fulbright grantees were sent this year to academic programs for Masters, PhD and research in the United States, and in exchange Uganda welcomed nine U.S. Fulbrighters to conduct research.

Makerere university and the people of America have had great partnerships that have seen America’s public Health enthusiasts and other specialists come to Uganda to conduct research. They include the National Institutes of Health (NIH), he U.S. Centers for Disease Control and Prevention (CDC), President’s Emergency Plan for AIDS Relief (PEPFAR), and so many others. 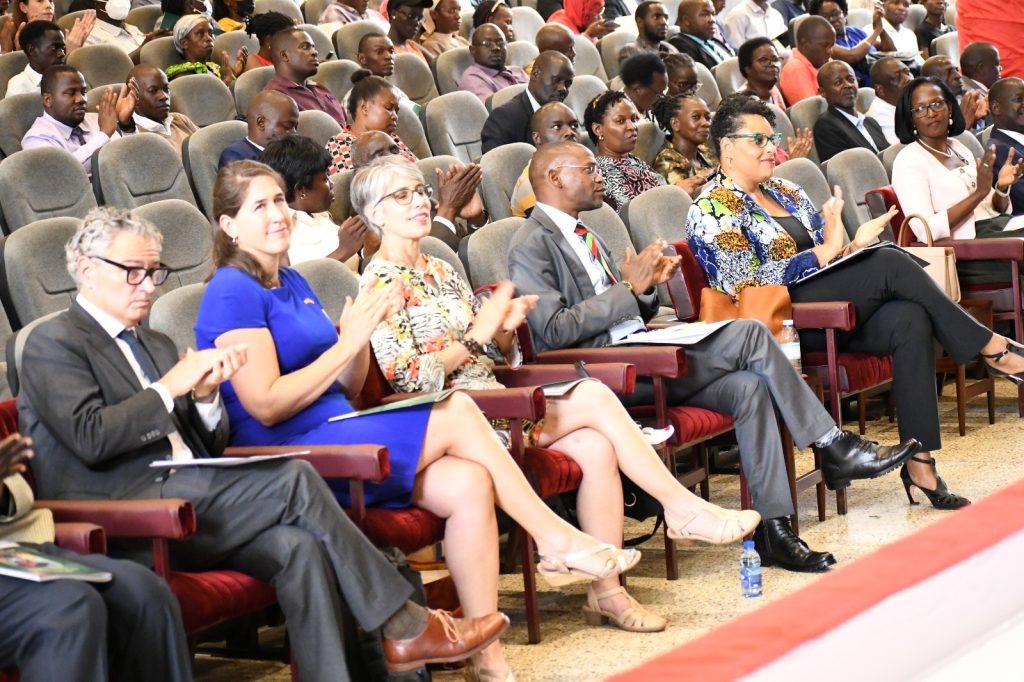 H.E. Natalie Brown, dignitaries and part of the audience applaud during the proceedings

The key note speaker for the day and the Vice president and Associate provost for Internationalization at the university of Notre dam Dr. Michael Pippenger challenged African Universities on ensuring Solidarity, Commitment and transparency if they actually want to internalize since it not only helps them realize weaknesses, strengths and potential areas of collaboration but builds transformative and global minded students.

“It is not MOUs and agreements we sign that show internationalization, but rather the work we do while together on ending pandemics, fostering Rule of law and other community impactful engagements. Surprisingly Prof Kajubi knew all this”. Concluded Dr. Pippenger who urged universities to stick to their visions and mission which should reflect on the communities they serve. 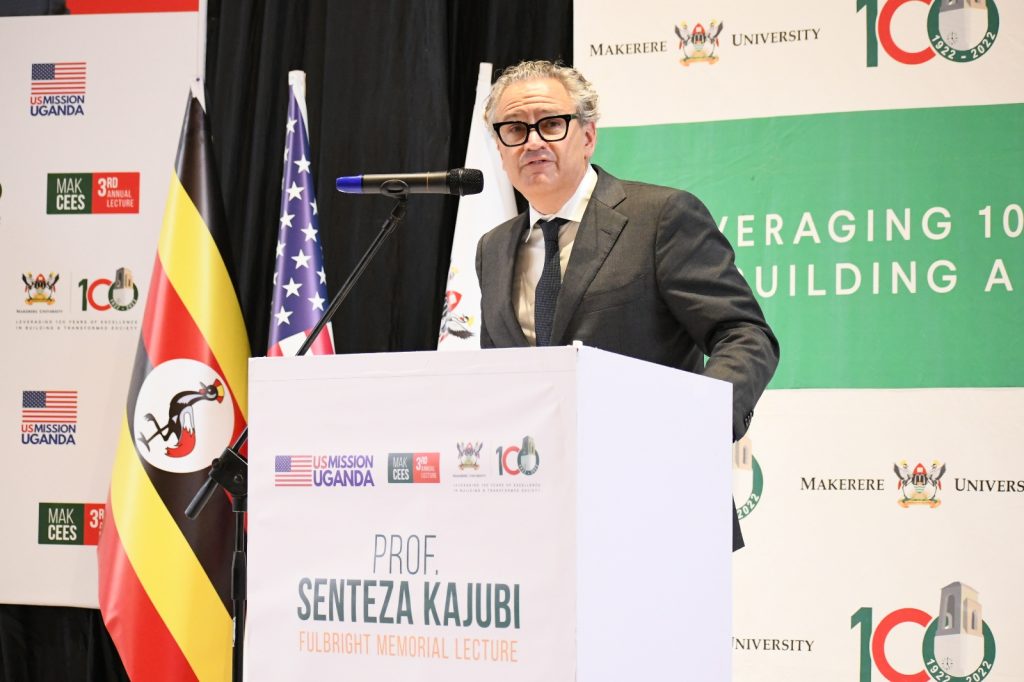 Prof. William Senteza Kajubi served as the Vice Chancellor of Makerere University at two different intervals 1977 – 1979 and 1990 – 1993. He was also a member of the constitutional Assembly that drafted Uganda’s constitution of 1995. He devoted his life to Academics and impacting communities until his death on May 1st, 2012.

Prof. Senteza Kajubi was born in 1926, in Singo county (modern day Mityana District), to Yoweri Bugonzi Kajubi and Bulanina Namukomya. His family later moved closer to the capital and settled in Busega, a suburb in the outskirts of Kampala, where he began his long journey with, or rather in, education at the Mackay Memorial Primary School in 1933. He then attended Mengo Junior School from 1941 to 1943 before transferring to King’s College Budo for his Advanced Level, finally making it to Makerere College in 1947 where he pursued a Bachelor of Arts with a Diploma in Education.

Shortly after he graduated, Prof. Kajubi taught at Kako Junior Secondary School before going to the University of Chicago for a Master of Science in Geography. Later, in 1955, he went back to his alma mater, King’s College Budo, and taught Geography. It was during this period that he taught other notable personalities in Uganda’s history such as Mathew Rukikaire and Prof. Apollo Nsibambi in a predominantly white environment. The only other native teachers at Budo, then, were the Deputy Headteacher, Mr. Sempebwa and Erisa Kironde, an English language teacher.

As one of the few Protestant members of a predominantly Catholic Democratic party (DP), Senteza Kajubi was a member of the National Symbols Committee which was tasked with selecting the national anthem, flag and coat of arms. 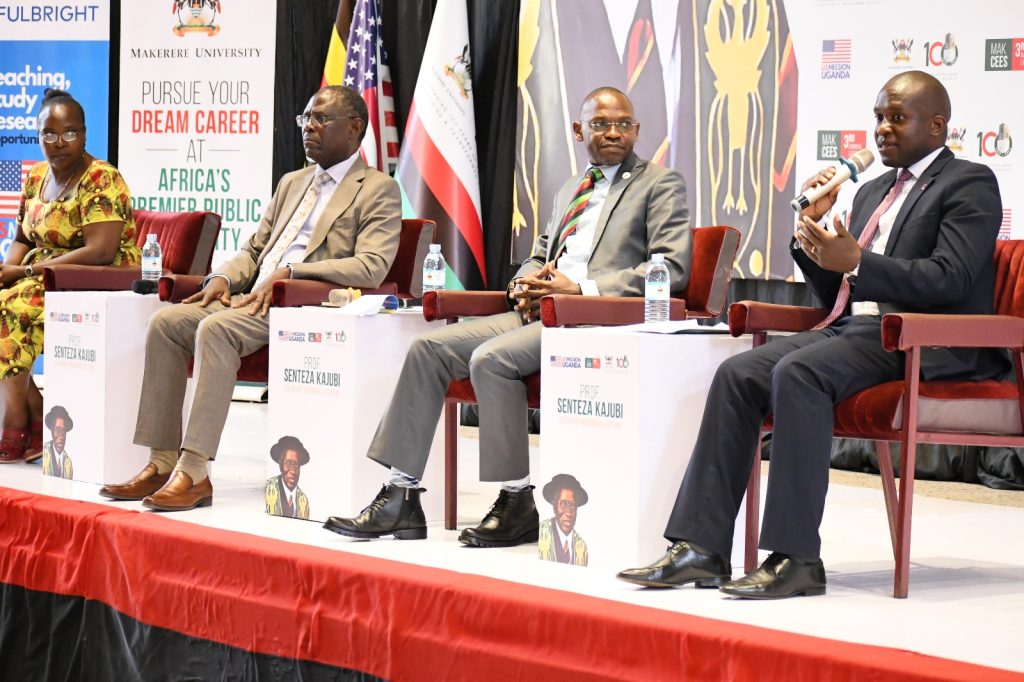 His political acumen propelled him to chair a number of government boards over the years until he directly participated in electoral politics in 1994 as a delegate of the Constituent Assembly representing Kyadondo North.

Two years after Uganda got independence, now a lecturer at Makerere, Prof. Senteza was appointed the director of National Institute of Education. He served there until 1977 when he became Vice Chancellor for the first time.

As the Secretary General of the Uganda Teachers’ Association from 1959 to 1962, Prof. Senteza Kajubi was a member of the famed Castle Commission on Uganda’s post-independence education policy framework.

Instituted and appointed in January 1963, the Castle Commission had been tasked with examining the content and structure of education in Uganda in light of the approved recommendations of the International Bank Survey Mission Report, Uganda’s financial position and its future manpower requirement.

In the execution of its mandate, the commission dealt with a dilemma; if the formulated policy disproportionately focused on universal primary education and adult literacy while neglecting secondary, tertiary and higher education, it would fail to produce high level manpower which was required to staff government and teach in schools. However, on the other hand, the country did not have the resources to make improvements across the board and had to prioritise one option to the detriment of the other.

Since Makerere was still under the University of East Africa and higher education was still an inter-territorial responsibility, the commission instead focused on prioritising teacher-training, expanding secondary school enrolment and improving relevance, quality and access of primary education in remote areas.

In 1977, during his first tenure as the Vice Chancellor of Makerere University, Prof. Kajubi went on to chair the Education Policy Review Commission (EPRC) which was appointed by Idi Amin’s Minister of Education, Brig. Barnabas Kili. 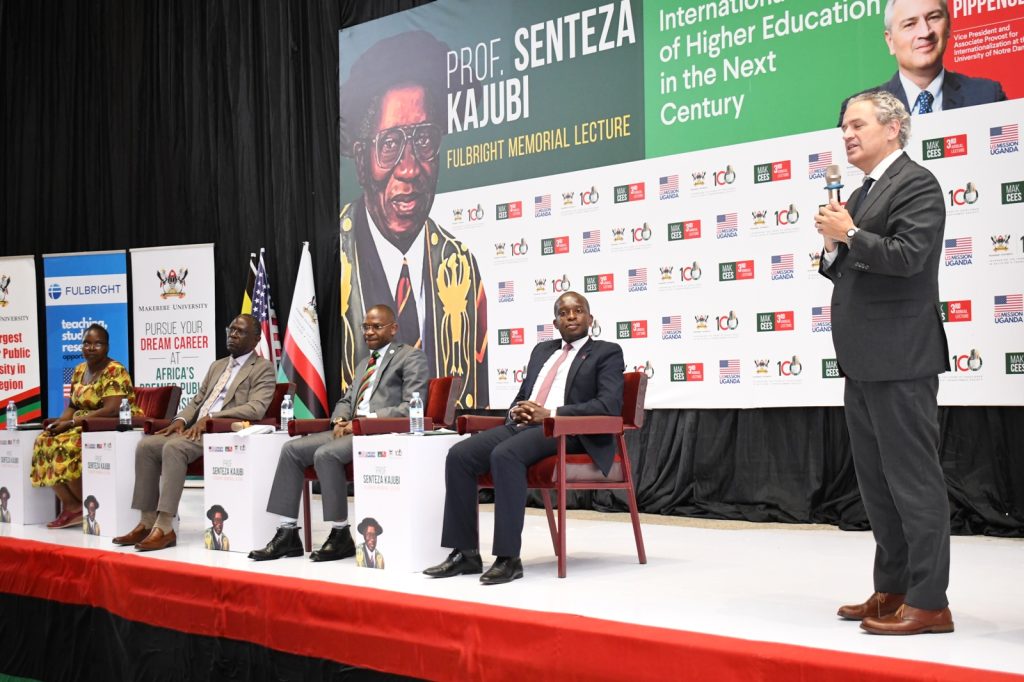 Dr. Michael Pippenger (R) joins members of the Panel on stage during the interaction with the audience at the Prof. Senteza Kajubi Fulbright Memorial Lecture

Owing to the political climate at the time, the education system was facing even dire problems. The gross human rights violations had led to a mass exodus of highly qualified professionals from civil service, teachers and university faculty into exile. Imploding diplomatic relations rendered external assistance with regard to education inexistent and the government had to deal with shortages from personnel to instructional material.

Prof. Senteza Kajubi was then tasked with the responsibility of leading an effort to circumvent some of these challenges and therefore keeping the education system in Uganda alive. Unfortunately, the findings and recommendations of the report, from its members and constituent sub-committees were overtaken by events in 1979 when war broke out and the Idi Amin regime was overthrown. The report was shelved and never formally presented to cabinet.

In 1987, after the ascendancy of the NRM government into power, another commission, once again headed by Prof. Senteza Kajubi, was appointed. Still under similarly unique circumstances, this commission too had to work within the socio-economic confines of a post-war society riddled with scarcity of resources. Eighteen months later, the commission’s report was produced in January 1989. 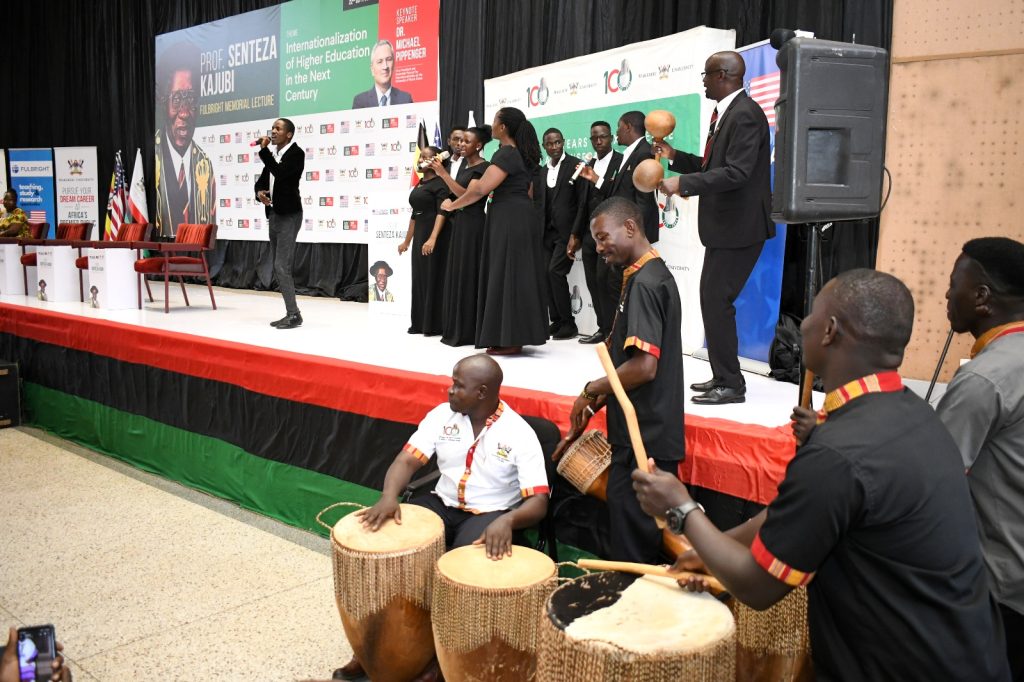 The Department of Performing Arts and Film (PAF), Makerere University puts on a show the musical interlude.

The most notable outcome of this committee report was a government white paper which brought to life the famous Universal Primary Education. This recommendation alone, for all its limitations, has contributed significantly to literacy levels in Uganda and to the education system as a whole.

After chairing the second Kajubi commission, he then became the Vice Chancellor of Makerere University for the second time, from 1990 to 1993, preceded by Prof. George Kirya and succeeded by Prof. John Ssebuwufu.

In 1952, Prof. Senteza went on to the University of Chicago, on a Fulbright Scholarship, to pursue a Master of Science in geography, making him the first African beneficiary of this scholarship program.

The student exchange scholarship program, which was started shortly after the Second World War by an act of Congress, was named after the American senator J. William Fulbright, its framer. He made the case that “educational exchange could turn nations into people, contributing as no other form of communication can to the humanising of international relations.”

Through his notable achievements and illustrious career, it is clear that this initiative to bridge cultural gaps through an international education exchange program had Prof. Senteza as one its successes.